For many years History has proved to be the most popular of all the options offered at Polesworth and the department has consistently produced outstanding GCSE results. It is taught by a team of qualified historians all of whom have a record of producing successful exam results. You will study a varied range of topics and develop a range of useful and valuable skills.

REMEMBER IF YOU HAVE ENJOYED HISTORY IN YEARS 7-9 WHY GIVE IT UP NOW. THINGS ONLY GET BETTER AT GCSE.

There will be five area of study that are assessed in 3 exams.

We will be following the OCR SHP History syllabus: http://www.ocr.org.uk/qualifications/gcse-history-b-schools-history-project-j411-from-2016/

The story of the everyday health and living conditions that shaped the lives of ordinary people in England.

We begin by looking at the Black Death in the Middle Ages and the conditions that led to spread of the disease which killed between 40-60 % of the population. This was an event that shaped the future of Britain for several hundred years to come.

Conditions in towns in the medieval times were dreadful, but this does not mean that people did not try to keep themselves clean. See how the government and individuals struggled against the mountain of waste generated in towns and cities.

In the 19th Century conditions in towns worsened as the population grew. Cholera became a major threat in British cities. When John Snow proved the link between conditions in the towns and the water supply and Louis Pasteur discovered germs the government began to react by passing a series of laws that were to clean up Britain.

Once clean people began to realise that the greatest cause of ill-health was poverty and pollution. We shall see how these were fought up to the present day.

How does government respond to public health threats today?

The introduction of the NHS in 1948 was important in improving the health of Britain.

John Snow discovered the link between dirty water and disease He did this by investigating where people got their water from. Those who had caught cholera had all drunk from the Broad Street Pump. He removed the handle of the pump and the outbreak ended.

In the final years of her reign Queen Elizabeth faced a series of threats both from abroad, in the form of the Spanish, and at home from Catholic plotters. However we can see it was a time when England started to become a great nation, enemies were defeated, the Empire started and life in England became safer and more prosperous for most people.

We will study:
The Spanish Armada. Why was it sent? Why did England defeat the Spanish?
Threats from Catholics.
Plots and rebellions against Elizabeth.
Mary Queen of Scots was she a threat?
Mary’s execution.

The start of the British Empire.

The voyages of Sir Francis Drake, the first Englishman to sail around the world. First settlement in America.
We will consider how Elizabeth ruled the country.  The rebellion of the Earl of Essex.

In addition to the events surrounding Elizabeth we will look at the family life of the rich and poor at the end of the 16th Century, including the treatment of the poor.

At this time there was a widespread belief in witchcraft and many people were executed as witches. We will study these beliefs and the treatment of those accused as witches.

Drake raided Spanish treasure ships and settlements in the New World.  He claimed land in North America for Queen Elizabeth. The Spanish nicknamed him ‘The Dragon’

Under Elizabeth a settlement was created at Roanoke in America. The colonists disappeared during the war with Spain. To this day no-one knows what happened to them.

As part of the course you will have to study an historic site and its archaeology. We will look at Raglan Castle a site established under the Normans which developed overtime into a magnificent building. Throughout its history it was more of a grand home than a military base. All this was to change when the Civil War( 1642-6) came to Raglan. A long siege followed with Raglan being the last castle to fall in the Civil War.

We will study how Raglan developed as a magnificent home for the Herberts and later the Raglans and its role in the Civil War. Studying the site of Raglan as it is today reveals much about how it would have looked in the past.

One of the most feared peoples of the Dark Ages, the Vikings, established a culture and belief system in Scandinavia that was to become incredibly successful.
They left their homelands to trade with peoples across the world. In addition they would raid their enemies without mercy. From Russia in the north to the Arabs in the south, people knew and feared the Vikings.

In this course you will look at:

The lives of the Vikings, their beliefs and rituals. How they traded and raided from Russia to the Arab World.
Viking ships and the attacks on England and how they fought. Their eventual settlement in Britain.
We will look at great warriors such as:
Svein Forkbeard and his invasion of England. Harald Bluetooth
The Vikings in Iceland. Greenland and America.

In 1933 Hitler came to power in Germany and so began one of the most infamous times in human history. The Nazis ruled through of terror, smashing their opponents with ruthless efficiency and starting a war that was to engulf Europe and the world.

How Hitler and the Nazis seized power in Germany.
How they controlled the country through, the Gestapo, the SS, concentration camps and propaganda.
Opposition to the Nazis from church leaders, the left and youth groups.
The persecution of the Jews and the Holocaust.
The War and its impact in Germany, western and eastern Europe.
Resistance and cooperation with the Nazis in Europe.

On November 10th 1944, the Gestapo hanged 13 people in a residential street in Cologne without trial.

Six of those killed were teenagers, members of an underground group called the Edelweiss Pirates.

An alternative movement to the Hitler Youth, the Edelweiss Pirates grew their hair long and risked arrest, torture and their lives to carry out small acts of sabotage against the Nazi regime.

The course, as with all new GCSEs, is entirely assessed by examination. There are 3 exams two of which last 1 hour 45mins and one that lasts 1 hour. Sample exam papers can be found on the OCR web site.

A visit to Raglan Castle to support your study of the site.
A 2 day trip to London, staying on the HMS Belfast, to support various aspects of the course and to see the sights. 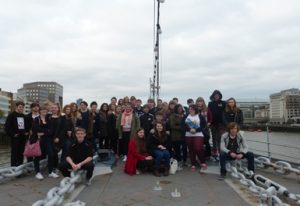